This last-minute sleigh ride proposal in Breckenridge, Colorado happened in the dreamiest winter wonderland! The hills were blanketed with a fresh coat of snow, and the sun was shining. Fernanda couldn’t believe her eyes when Julio dropped to his knee amongst the snow-capped pines and asked her to marry him. With the biggest smile, she said yes! 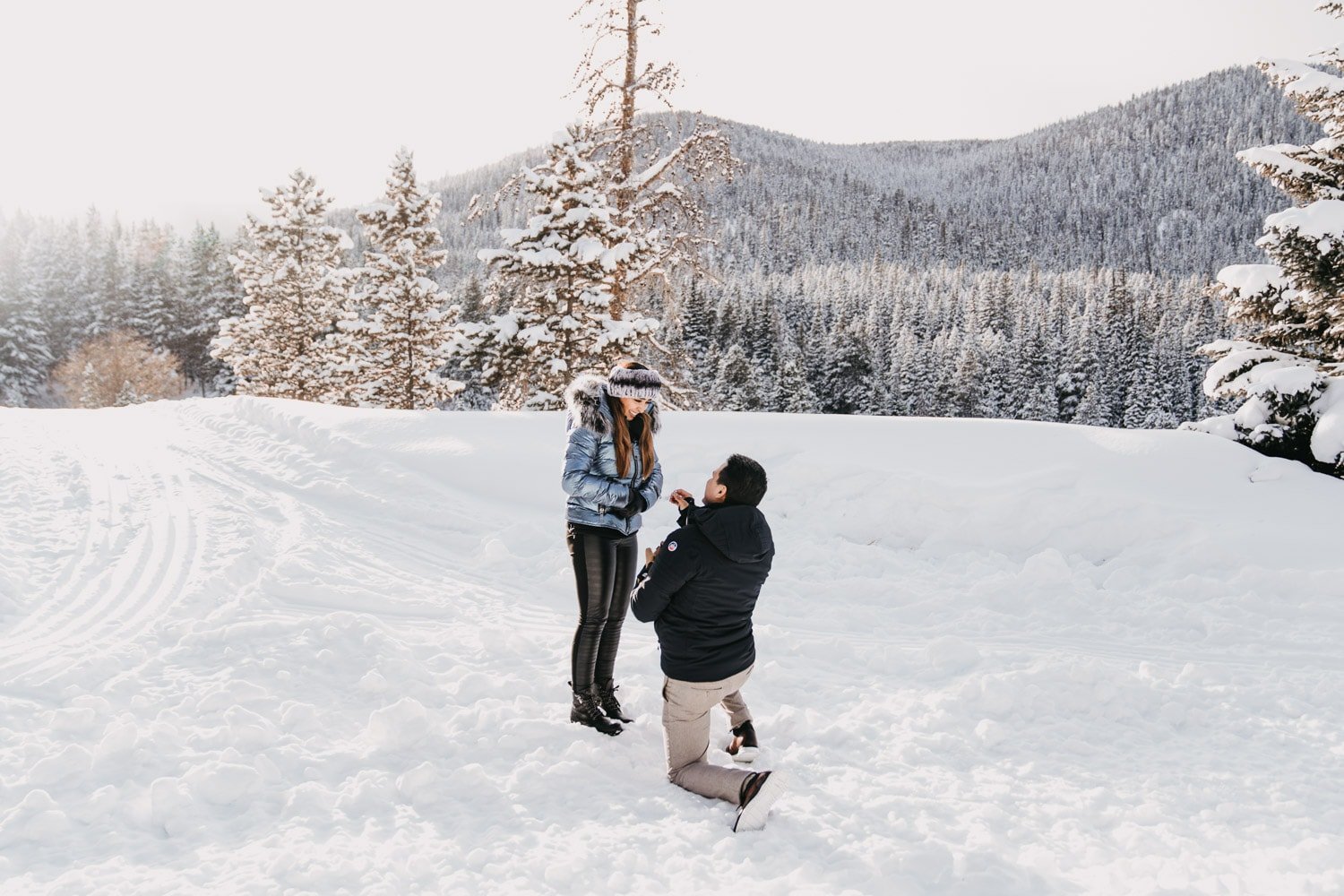 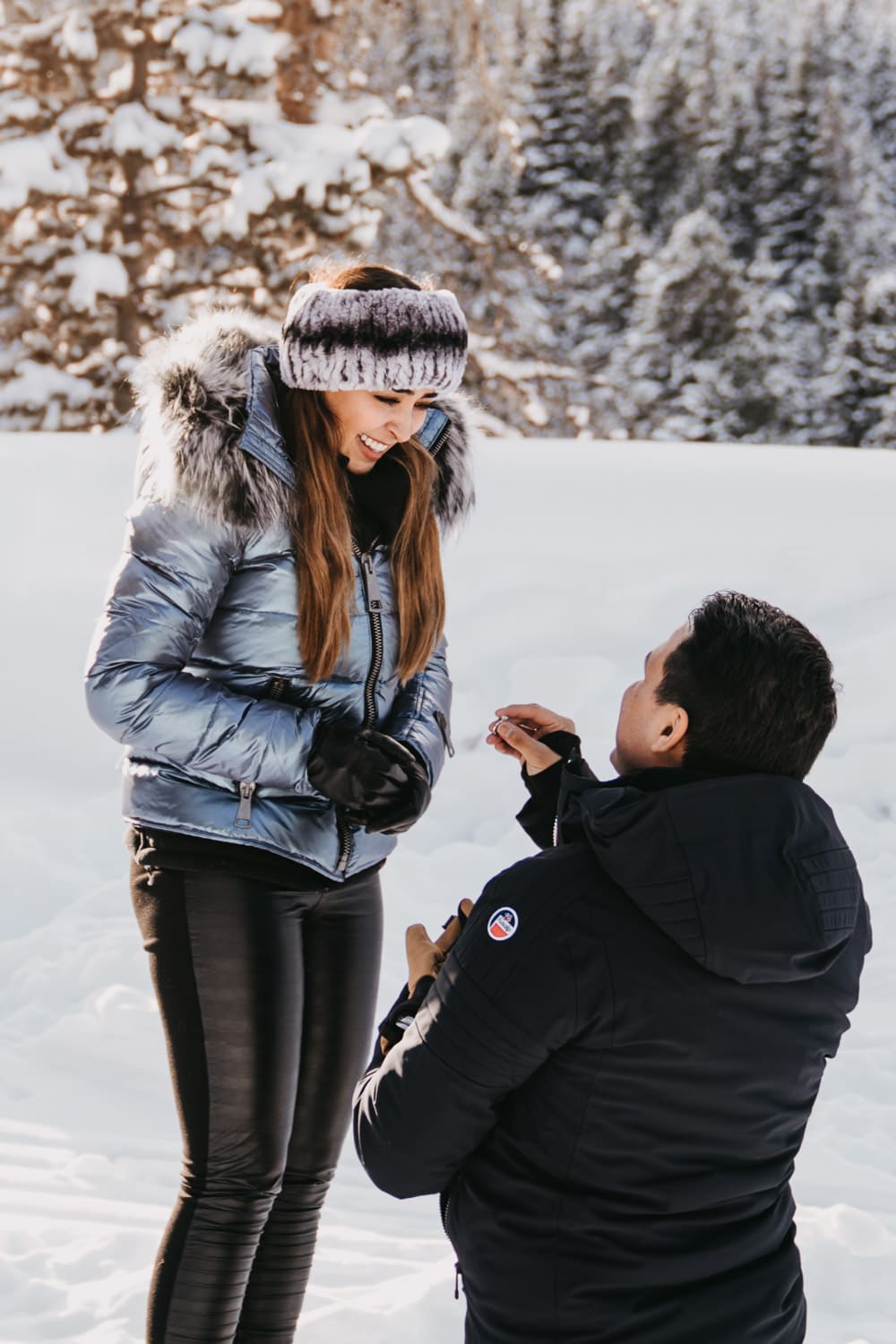 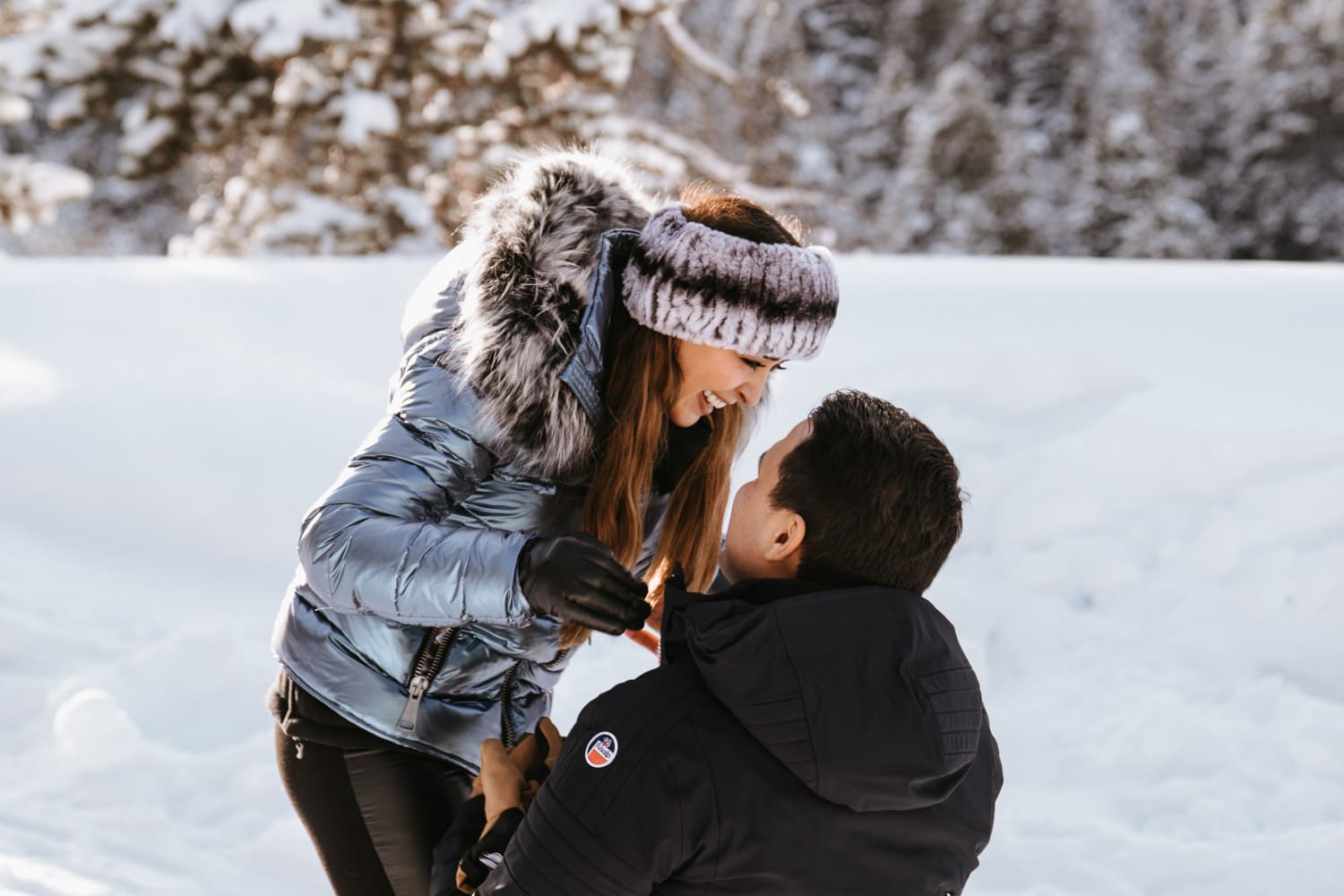 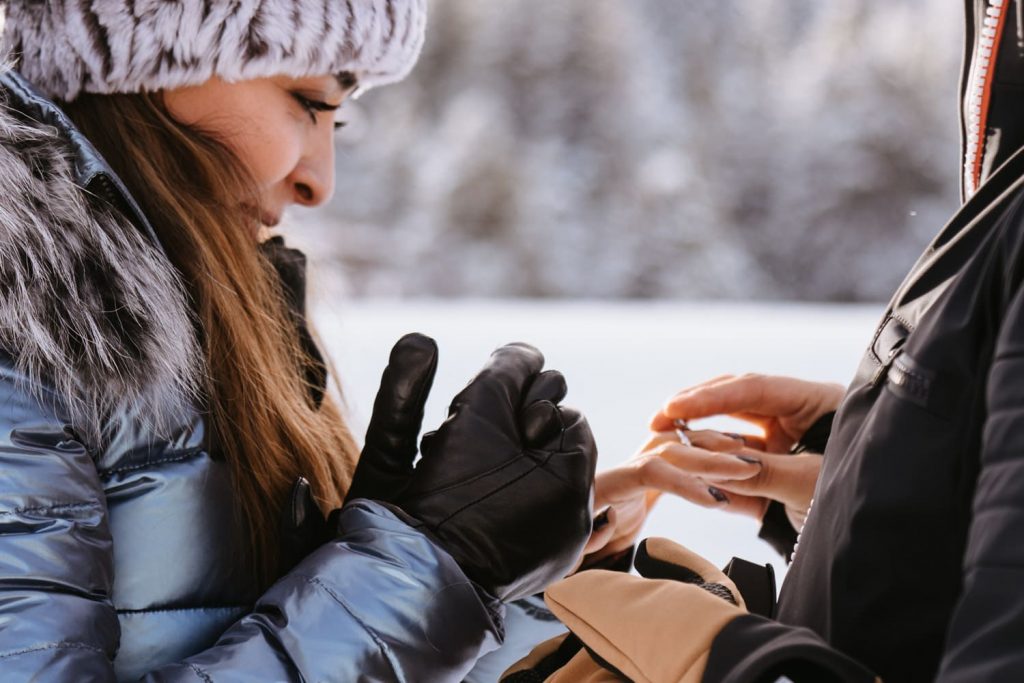 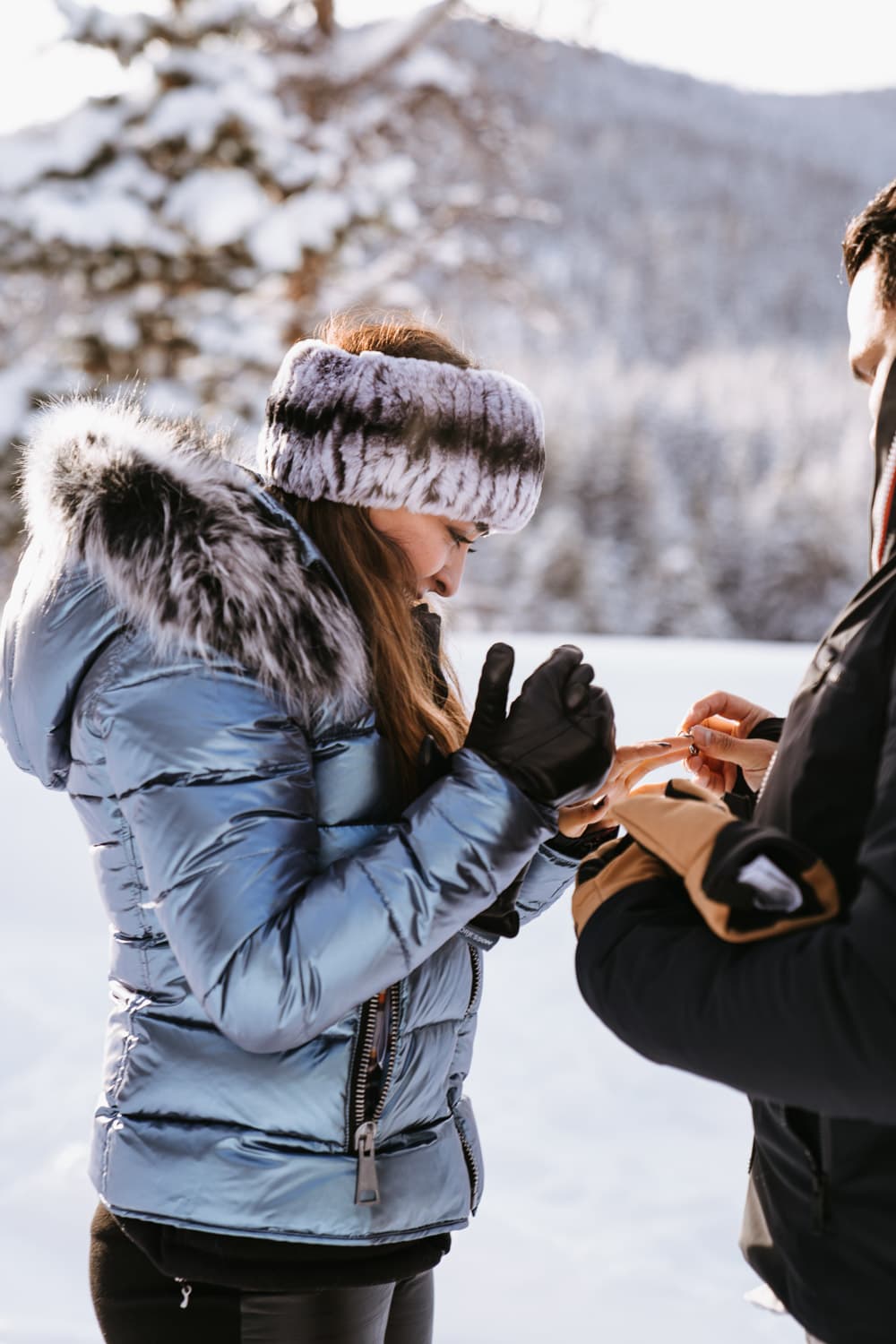 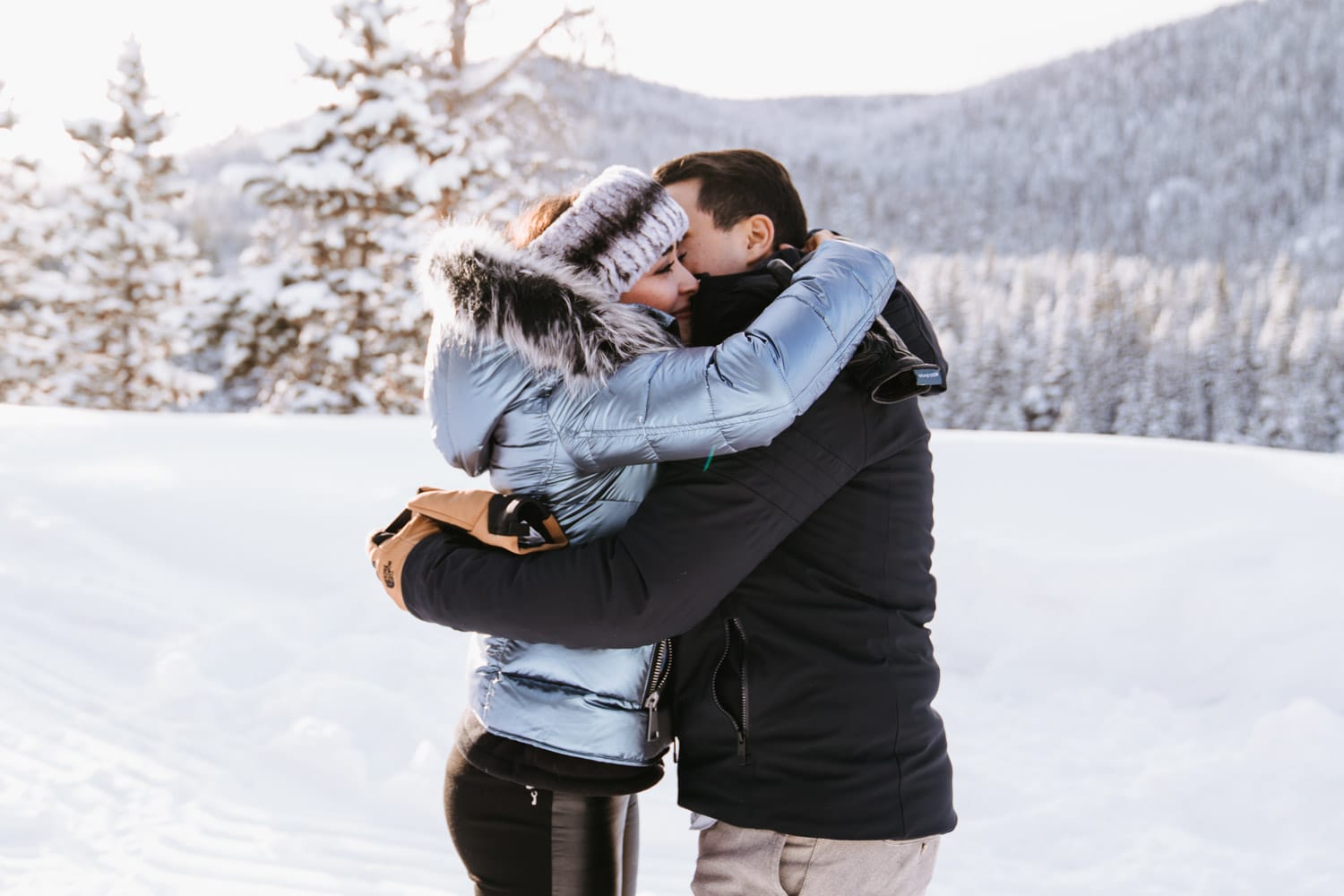 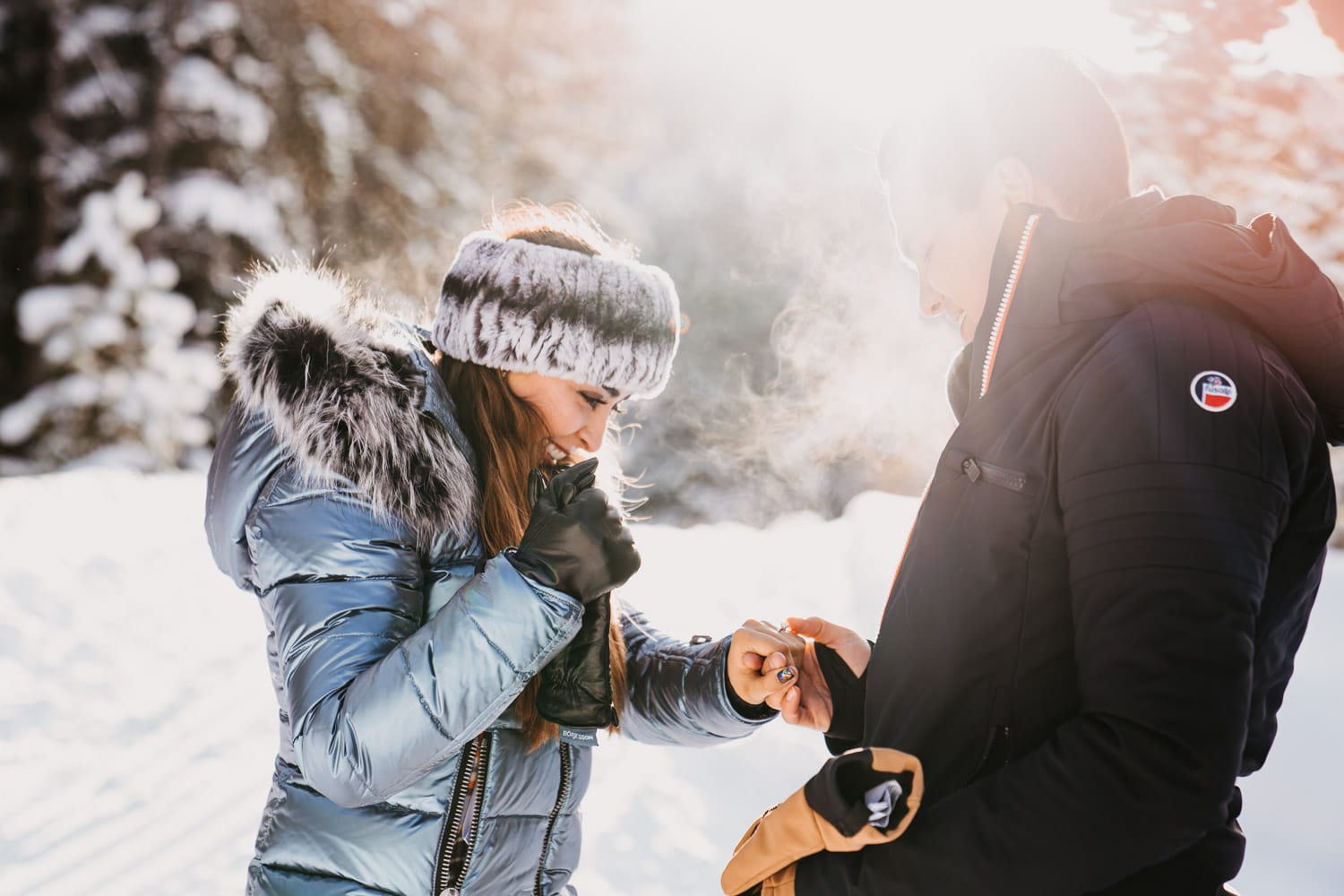 It all began when Jes (Knotted Proposals) contacted me about a sleigh ride proposal in Breckenridge she was planning in a few short days. Julio contacted her because he was visiting Colorado from Mexico with his partner, Fernanda, and he had just purchased an engagement ring. Everything happened so quickly, and Jes was ready for the challenge. She suggested a sleigh ride and they planned an afternoon with Golden Horseshoes Sleigh Rides in White River National Forest.

The two days before Julio and Fernanda’s proposal, it snowed 24 inches. I arrived at Golden Horseshoes around 2:30 in the afternoon and walked through the fresh snow to a canvas tent. There, I found a cowboy hat and a walkie talkie waiting for me. I picked up the walkie and talked to Jen, our sleigh driver for the evening. She met me at the tent and explained that I’d be pretending to be her assistant for the ride until the surprise proposal. As Julio and Fernanda arrived and explored the grounds, I took some “marketing” photos. We then climbed into the gorgeous sleigh, pulled by a beautiful mare named Ashley.

The sleigh ride up into the hills was incredible! The snow-covered pines closed in as the path narrowed, and Ashley high-stepped it through the snow like a champ! Julio and Fernanda sat behind me in the sleigh and took in the gorgeous views. Fernanda had no idea what was coming! We stopped at a break in the trees where we could view nearby mountains. The sun was setting behind the peaks and it was prime golden hour. We could see snowmobile tracks in the snow but all was quiet. I began getting my camera gear out of my bag as Julio and Fernanda stepped down from the sleigh. I had to run to catch the proposal! Julio was so nervous and excited, he began reaching into his pocket and I got my camera up just in time to catch him drop to one knee. Fernanda was so surprised!

After taking photos amongst the trees and snow, we headed back down to the tent where a surprise was waiting. The canvas tent was lit by two fireplaces that warmed us from the snowy ride. It had been the perfect day – no wind, plenty of sun, but still a nippy 10 degrees in Breckenridge. I actually wore my snowboarding gear for this proposal! We were glad to be back inside as the sun was setting. A personalized bottle of champagne, as well as “bride” and “groom” glass awaited Fernanda and Julio. It was just the three of us in the tent, and I snapped photos as they talked to each other and shared a private moment. I’m not sure what was said, but the smiles and happy tears spoke volumes!

One of the Most Beautiful Proposal Spots in Breckenridge

Golden Horseshoes Sleigh Rides is about 10 miles outside downtown Breckenridge. The grounds are gorgeous and shared with two other businesses, where you can take snowmobiles or go dog sledding up into the forest.

We saw snowmobile tracks as we rode up into the hills; but the sleigh ride was private, giving Julio and Fernanda the chance to share some sweet moments together. After Julio proposed, Jen pulled a basket of flowers and chocolates out of the back of the sleigh and we popped champagne in the snow.

Capping the evening with a private champagne toast in the tent was so romantic! The table laid out for Julio and Fernanda was covered in candles, smores, and snacks for them to share. I couldn’t believe how perfect every little detail was – they were even given a personalized bottle of champagne with their names and date! This entire proposal was put together in about three days and every single thing went according to plan.

This sleigh ride proposal in Breckenridge could not have been more perfect. I am so excited for Julio and Fernanda as they begin this next chapter of their lives together, and they could not have chosen a more perfect place to share this moment!

Looking To Plan A Proposal?

Contact me below if you have questions on how to plan or proposal ideas. Colorado has no shortage of beautiful spots, and I guarantee we can come up with a creative way for you to propose to the love of your life!